The History of the Black Family in America; Looking Back on the 50th Anniversary of the March on Washington

Another thing, I took the bus to school everyday from 5th grade to 8th grade. I was only vaguely aware of the reason why I was assigned to a school that required me taking the bus everyday for a 30 to 45 minute ride each way but the reason was for racial integration of the school I went to. I am white and the neighborhood I lived in at the time was mostly white. Me and my other neighbors simply going to a school nearby would be no good because that would mean my classmates would be almost all white so instead I was bussed to a school in a mostly black residential area so that the student population would be racially integrated. I remember looking out the window of my school bus and when entering the “black part of town” the buildings and the cars people drove in noticeably deteriorated. This made a strong impression on me. Even more impressive to me was when one time part of my class went down to visit the school’s kindergarten section and I was shocked to see that all the children were black. This is what told me that the school I went to was in a “black neighborhood” and then I understood why I was being bussed to school everyday; because otherwise the classes would be all black just like the kindergarten was all black. By the time 9th grade came around I went to a high school in my local neighborhood that I could walk to. Then it was time for the black and Hispanic students to be bussed to my white neighborhood school.

There was something I was unaware of regarding the condition of blacks at the time I was learning about the Civil Rights Movement in a school I was being bussed to as a result of the Civil Rights Movement; that was the dire situation of the black family. I knew blacks were poor compared to whites and I was vaguely aware that blacks had it worse in a number of different areas of life but I had no particular awareness that the black family in particular was in bad shape. In 1985, about the time I was being educated on the Civil Rights Movement in my classrooms, the white out-of-wedlock birth ratio was 14.7% and the black out-of-wedlock birth ratio was 61.2% (in 2011 illegitimacy was 29.0% for whites and 71.8% for blacks). I had no idea of this radical disparity between blacks and whites based on what my teachers taught me and no other sources of information directed towards me highlighted this difference between blacks and whites either.

Black women have also historically had their children at younger ages than whites and had more children in total. Below is a table showing lifetime fertility for women born in 1867, 1900, and 1950; and fertility up to age 25 for women born in 1980. For women born in 1900 and 1950 the proportion of their children that they had had by age 25 is also given. Data is also given for the year 2011; this refers to all births in the year 2011, not to women born in a particular year. The “% by 25” category here refers to the proportion of births to women under 25 years old. “White Fer.” refers to white fertility and “Black Fer.” refers to black fertility. Data for “Born in 1867” and “Born in 1900” for blacks actually refers to all non-whites; the great majority of non-whites being black. For later years the black category refers to blacks specifically.

So where did this black family dysfunction get started? The most logical answer is during slavery. As an article titled “Slave Family Life” describes things:

“Slave marriages and family ties were not recognized by American law. Any owner was free to sell husbands from wives, parents from children, and brothers from sisters. Many large slaveholders had numerous plantations and frequently shifted slaves, splitting families in the process.

The most conservative estimates indicate that at least 10 to 20 percent of slave marriages were destroyed by sale. The sale of children from parents was even more common. As a result of the sale or death of a father or mother, over a third of all slave children grew up in households from which one or both parents were absent.

On large plantations, one slave father in three had a different owner than his wife, and could visit his family only at his master’s discretion. On smaller holdings, divided ownership and mother-headed households occurred even more frequently. Many slaves had to share their single room cabins with relatives or other unrelated slaves. Even on model plantations, children between the ages of 7 and 10 were taken from their parents and sent to live in separate cabins.”

Putting together a narrative here on the history of the black family in America; first there was slavery. Slavery meant that blacks could not form secure family bonds; the needs of the slave master came first and the different members of a black family might be sold or transferred to new locations apart from each other. This forcible breaking of family bonds then led to the blacks under slavery adapting themselves to irregular and unpredictable family arrangements and skills and ethics related to family functioning probably weakened under these conditions.

This weakening of family preserving behaviors among blacks during slavery creates the initial dysfunction seen in black family life immediately after slavery ended. In addition there were other pressures on the black family related to poverty; this being higher death rates leading to large numbers of black women being widowed at relatively young ages, higher infant mortality rates, and fewer black married women being able to be kept out of the workforce due to their husband’s low earnings.

Early on you see higher overall black fertility and black women having their children at younger ages. This may be due to higher infant mortality and higher death rates in general putting pressure on black women to have more children to maintain the population. Also having children at younger ages may be a way to deal with shorter life expectancy and higher chances of widowhood for the mother at a relatively young age. If the black woman sees herself as having fewer good years of health to rely upon it makes sense for her to have her children at a younger age.

After this “bad start” due to slavery and discrimination against blacks in general; discrimination which forcefully continued all the way up to 1965; then came the overall deterioration of the family which accelerated after 1960. Starting from a high level of family dysfunction in 1960 the “Feminist Explosion” as I have called it hit blacks particularly hard.

As for equality for blacks? Family breakdown has greatly increased inequality between blacks and whites; blacks have fared far worse than whites from the ravages of the Feminist Explosion. Equality for blacks is still a long way off. The reestablishment of patriarchy however will go a long way towards fixing the problems of the black family; a necessary pre-requisite before any kind of equality between blacks and whites can be achieved. 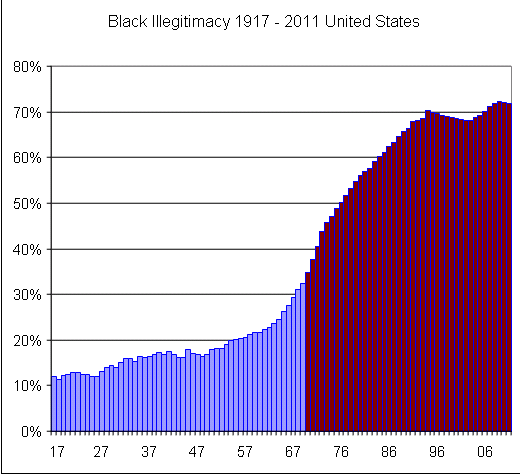 Also I recommend “The Negro Family: The Case for National Action” that was issued in March 1965 by Daniel Patrick Moynihan. This report is also referred to as “The Moynihan Report.”

The Negro Family: The Case for National Action

Statistics of Women at Work

Homicide Trends in the United States 1980 to 2008 – Spreadsheets

Vital Statistics of the United States

11 Responses to The History of the Black Family in America; Looking Back on the 50th Anniversary of the March on Washington